Our storm chase had a noteworthy and quite photographic event on July 29, 2019 that showed the incredible power of a mid-summer supercell along the high plains off the Central Rockies.

On this day, the storm prediction center had eastern Colorado under a marginal threat for severe thunderstorms. At 9:30am local time, we began monitoring atmospheric conditions through the real-time meso analysis page provided by the SPC while also looking closely at short range computer model projections for thunderstorm development across the eastern plains. 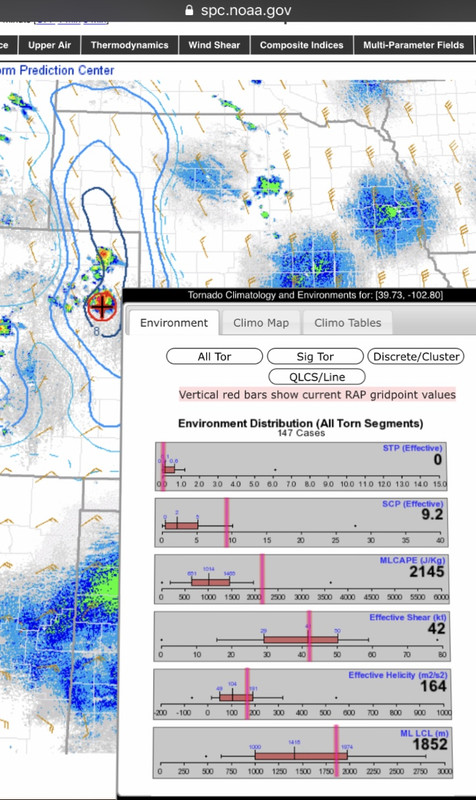 Given the explosive and favorable atmospheric conditions, we began our chase at 1:30 local time. Shortly after we descended eastward from the Front Range, a couple vigorous updraft towers began building to the east including a potential strong storm east of Sterling that was quite impressive. Incredibly, radar data already showed the storm tops in excess of 55,000 feet and building. We also noted very impressive towers down to the south of Akron, CO about 30 miles to our southeast. After a short chase conference, we began intercepting the storm near Sterling as we were closest to it. As we continued north on Interstate 76 the storm to the east of Sterling continued to look very impressive, down to the south of Akron the convection began to build vigorously.

While monitoring the southern cell, we observed the radar data showing that the storm south of Akron was splitting. Storm motion was ESE on the majority of this convection. However, the left split of the southern storm was moving to the northwest. This would put it on a collision course with the storm that we were tracking out of Sterling. Electing to pass up documentation of the cell to our south, we made our way to the Brush exit off of I-76 and headed to the east in order to get as close as we could to the cell merger that was about to occur near Eckley, CO. During this time, we also observed a right split to our southeast. Radar data showed that the storm was beginning to strengthen as it was moving due south into a slightly more unstable and convectively untapped environment. Decisions loomed.

Our decision, which proved to be fateful for the rest of our chase day put us in pursuit of the storm to our east being that it was much closer and was also showing signs of intensification. As we approached the storm which was now just east of Eckley, we noticed that the base was forming some interesting features. While observing, we could see some low hanging ragged cloud bases with a hint of rotation to them. Upon arrival on the storm, it became clear that the cell had become outflow dominant and the main threat with it would be damaging winds and large hail. We would continue to observe the storm for another 10 to 15 minutes before making a decision to drive south and intercept the southern more powerful storm. As we drove south we began to notice single channel lightning emanating from what was now a very long anvil that spread all the way into western Kansas. By the time we arrived in Burlington we began to notice a very dark and low hanging base to our southwest associated with this storm. We continued to our south in order to get in front of this powerful supercell and witness one of the season's more incredible storms. 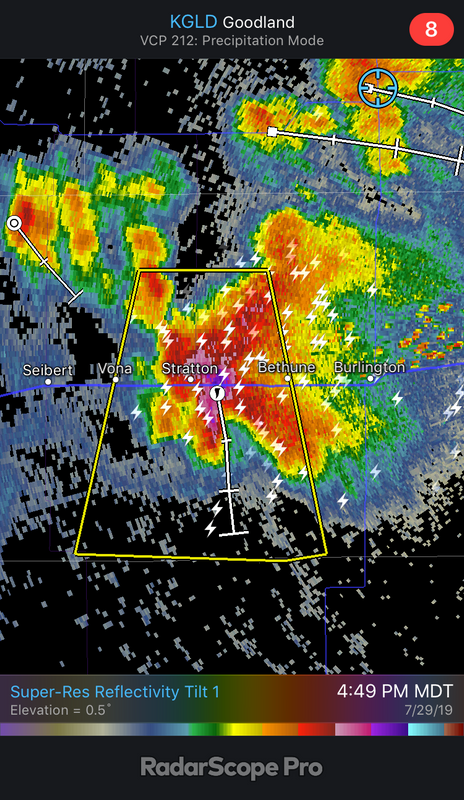 Intercepting the monster as it intensifies near I-70 West of Burlington, CO 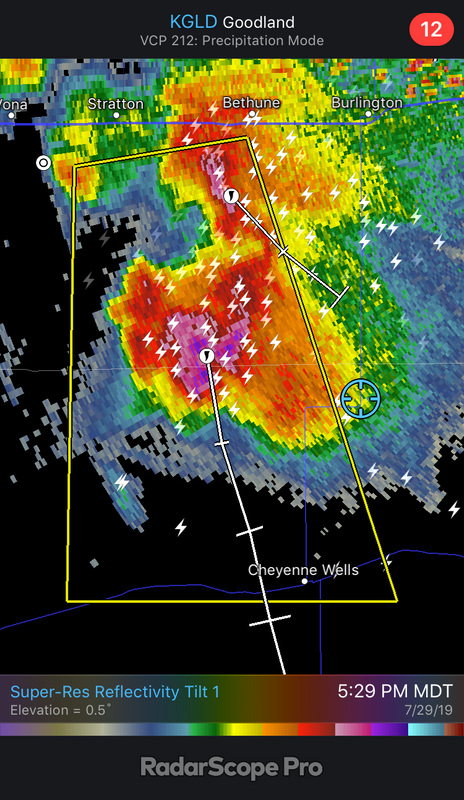 A fully evolved classic Supercell near its peak on Radar

Passing through Burlington on 385 South, the storm began to evolve. By the time we reached the famous bend on Highway 385, we noticed an extremely dark and low hanging cloud base directly in front of us. We came within five minutes of being overtaken by this monstrous storm before the road veered south again. We were finally able to get in front of the storm just to the north of Cheyenne Wells, CO after a lengthy but fun navigation through the high plains.

Upon arrival, the view that we had of the base was impressive to say the least. At this time radar was showing echo tops in excess of 60,000 feet indicating an extremely powerful updraft. The storm's base had an appearance that indicated that the updraft was probably surface-based due to the ragged and convective nature of the cloud structure. At that time, we had to continue south in order to stay ahead of the storm as it over took Cheyenne Wells where it would dump copious amounts of rain and large hail. We noticed that the storm was ingesting dust at the interface of its outflow and inflow. We also observed several short lived spin ups on the periphery of the storms downdraft. As the storm passed to the south of Cheyenne Wells, it’s appearance became more laminar as it moved into an environment where surface-based instability was steadily decreasing.

The storm began to take on a stacked plates/flying saucer laminar appearance as it’s mesocyclone was now battling increasing convective inhibition in the lower levels of the atmosphere. At this point the storm could be considered an elevated supercell as the instability now resided at and above the 700 mbar level. We decided watch the storm move towards southeast as it began to dissipate. Despite being its weakening phase, the storm's mesocyclone still provided a beautiful view of its rotating flying saucer like base. 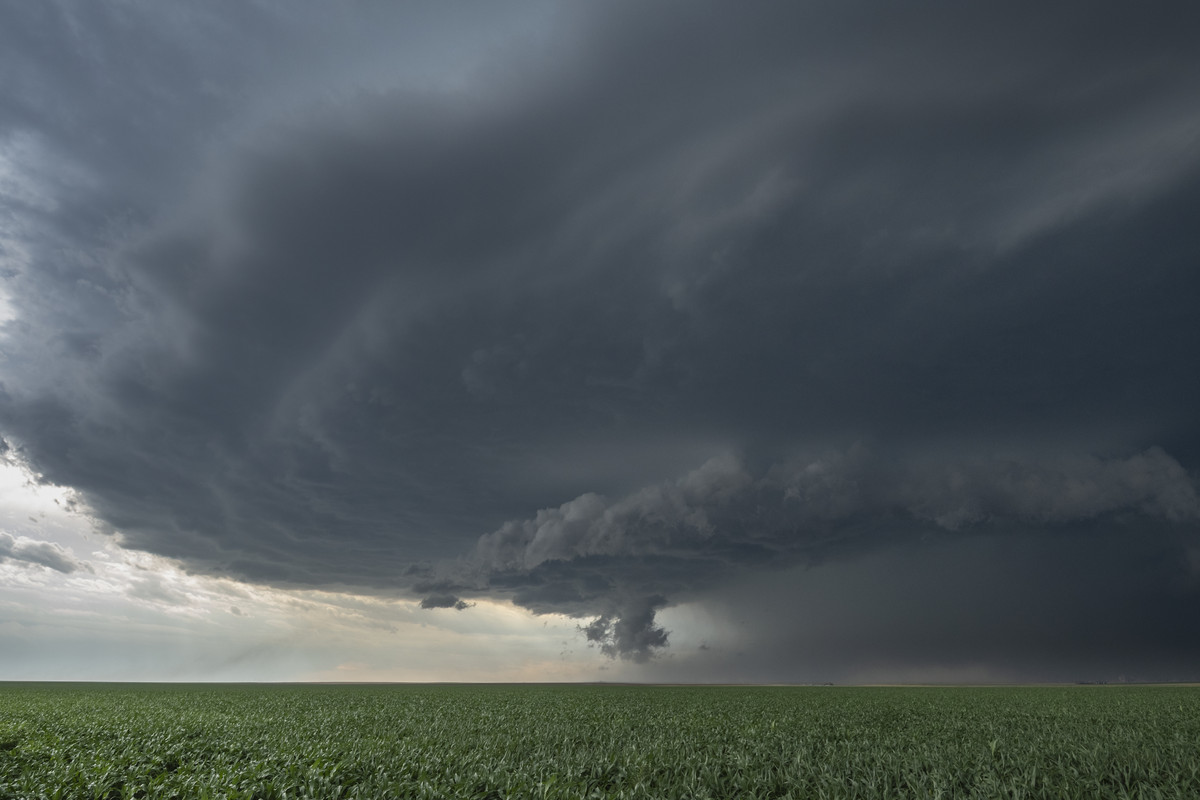 Directly east of the cell, scrambling to get in front of it 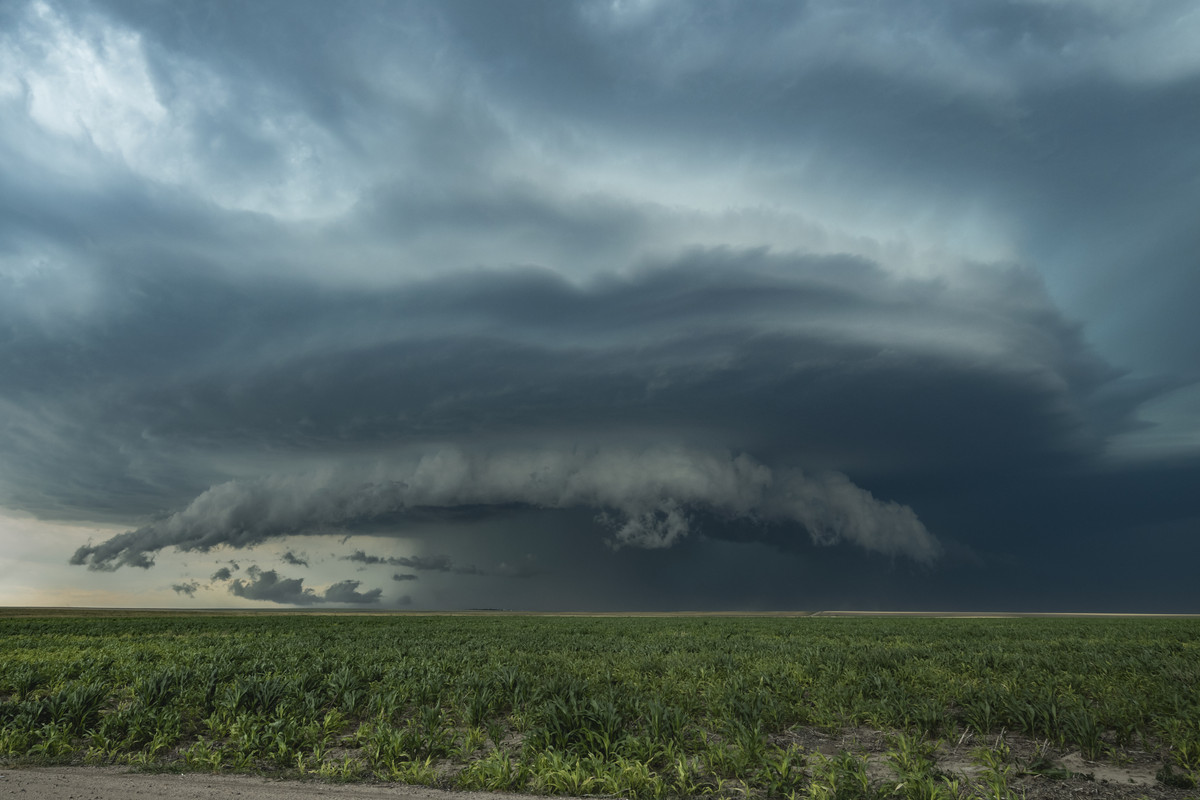 It is days like this that fill the mind with adrenaline and the heart with content. Seeing a monster of the high plains as it evolved and interacted with its enviroment was something that make chase days absolutely a blast to witness.

Until the next chase! 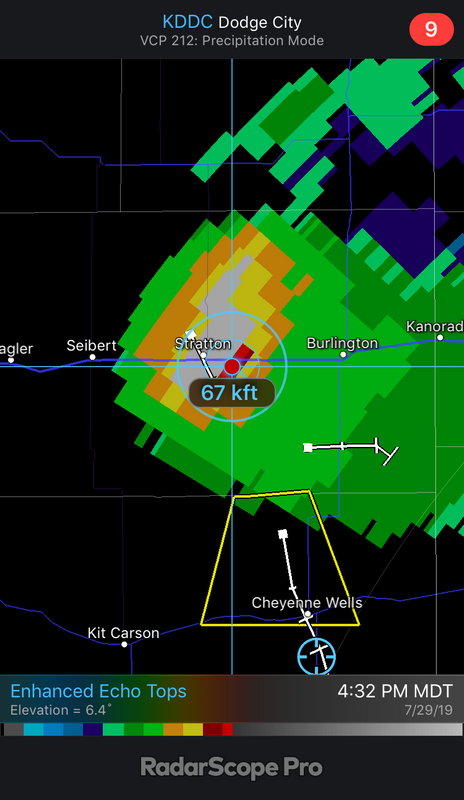 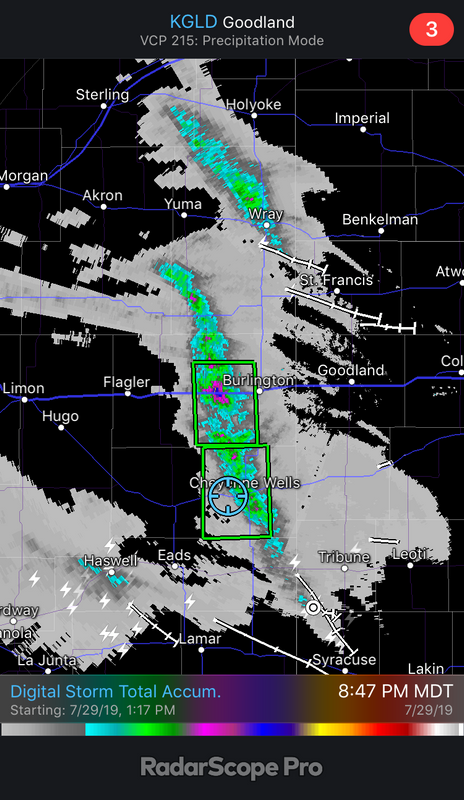 Rainfall totals in excess of 4 inches