Part I - A wild South Dakota HP Supercell appears
On August 6, 2019 the culmination of our team's forecasting and real time observations provided the most impressive storm of our chase season.
In this upcoming 3 day blog we will discuss the planning, the forecasting and of course the incredible storm that tracked through central South Dakota to northeast Nebraska. This apex chase delivered incredible beautiful sculpted mesocyclones, large hail, intense lightning and tornadic activity.

The Background - On Sunday, August 4 medium range models began to show the possibility of a severe thunderstorm event in the vicinity of central Nebraska. Forecast soundings depicted a favorable environment with high CAPE, decent SR helicity and adequate bulk shear. Along with decent parameters, some of the models also generated a couple of long track, discreet helicity swaths. This meant that the possibility for supercells to develop was there. Being that the potential event was still two days out, there was plenty of time for things to change that could affect storm mode and development across South Dakota into northern Nebraska.
We began discussing the possibility of making the trek to north-central Nebraska and possibly further eastward for our chase parameter if model output continued to show signals for supercell thunderstorm development.

On the morning of August 5th, one day before the chase was to begin, medium range models continued to show favorable parameters for severe thunderstorms across South Dakota into Nebraska. The models also continued to generate impressive long track helicity swaths albeit further to the north and east compared to previous runs.

An incredible forecasted robust helicity swath, one of the strongest of the 2019 chase season
At 12:23 local time, The SPC upgraded the thunderstorm outlook from marginal to slight across South Dakota and Northern Nebraska. It was at this point that we made the decision to go ahead with planning a chase somewhere in the vicinity of Valentine, NE with the possibility of shifting north or south as needed. We continued to monitor medium range models as well as forecast discussions from the SPC and local NWS offices in the area covered by the severe weather threat.
During the late evening we observed a cluster of very strong thunderstorms on radar across south east Wyoming. We were tempted to chase these but decided against it knowing that we would have an early start and a very long drive ahead of us the following day.

The Chase Day - At 7:30 AM August 6th, 2019 we departed the Front Range of Colorado and made our way towards the Nebraska border. As we crossed into North Platte, NE a few hours later we were greeted by small puffs of cumulus along with a noticeably more humid air mass, a promising sign for storm fuel development. By early afternoon short term model guidance was suggesting storm initiation would commence across the southern half of North Dakota into northern part of South Dakota. Of note, the storms were forecasted to track SSE.

While driving, our chase team took note that the bulk of the most intense storm activity would track to the east of Valentine, NE as also mirrored by the SPC Outlook upgrading their forecast to "Enhanced" for our target area.

Adjusting our target parameter and after stopping for gas and a little bit of food, we continued north crossing into the central-southern border of South Dakota by mid afternoon. Given the model data, short-term forecasts, and the initiation of storms 200 miles to our north, we decided to stage in Chamberlain, SD and plan our next move. Within a few minutes of arrival at our staging location we noticed the top of a thunderstorm poking through the haze to our northwest. Within 10 minutes of the initial sighting it appeared that the cell was beginning to takeoff so we decided to head north and intercept it.

It was this critical moment that dictated the rest of our chase day and its significance came with a commitment to drive 120 miles north of our current position, no small commitment, and one that would pay off tremendously.

Initiation of our chase near Gettysburg, SD

As we closed in on the storm over the next 2 hours we noticed rapidly growing cumulus towers feeding into an anvil cloud that extended many miles ahead of the main updraft. As our chase continued to evolve, our plan was to get to the town of Gettysburg, SD and stay ahead of the storm from there. By this time, the anticipation and many long hours commuting began to become palpable as we began to sense something extra special happening in the atmosphere. At that point, a casual drive along the frontier of summer fields and paved roads became noticeably more enthusiastic.

Lead forecaster Steve Saviano getting a distant view of the HP monster cell near Gettysburg, SD while waiting for road construction

As can happen on most chases, unpredictable road networks can be a hindrance from time to time. In this case, it was a hindrance as we ran into a significant construction zone east of the quickly evolving cell and were forced to wait there for about 20 minutes. With every minute that passed we grew more concerned that storm would soon be in a position that would make it impossible for us to get in front of it. At this point the storm had become a full-fledged supercell and was turning right against the mean flow becoming very powerful both visually and in intensity.

As we finally pushed past Gettysburg, we noted that the road was to make a very favorable left turn heading directly south of now intense outflow dominant supercell. The storm was radar-reporting 3" hail and throwing down frequent cloud-to-ground lightning as we scrambled to make the bend in the road, just as the notch of the storm sat within a couple miles to our north. Having successfully positioned ourselves in front of the storm, we could now begin to document the mesocyclone as it loomed menacingly in our rear view mirror nearby.

Tendrils of the beast

As we made our way south skirting the front end of the storm, we found some amazing late summer compositions in the sunflower fields next to Highway 83 and marveled at what a gigantic storm this monster was becoming every moment. The joy quickly became worry as intense lightning, hail and road construction became very possible obstacles as we traversed south in front of the storm. As we approached Onida, SD, the anvil of the storm began to throw down the most intense and consistent single-channel lightning that we have ever seen during a chase. The bolts were striking every couple seconds and most were within a couple miles of our position. 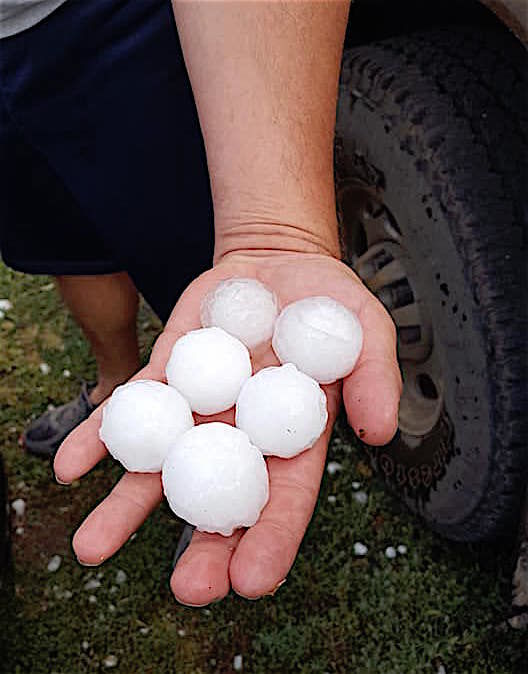 At this point, we found ourselves safely in front of the storm by several miles, or at least we thought. A series of red light construction zones became an obstacle as we neared the town of Blunt, SD near the intersection of highway 83 and highway 14. An uncomfortable delay awaited us during every construction stoplight as the once distant storm began to barrel towards us at a higher speed. Now, merely a mile before the intersection and our safe eastbound and down exit from the quickly approaching monster, we found ourselves stuck in a very long construction zone on the highway.

Fortune favored the bold as our navigation maps noted a dirt road exit that would divert us east and away from the delay. Merely minutes later, the 3" monster hail caught up to the town of Blunt and annihilated car windshields, sidings and businesses. We felt relieved to have narrowly escaped the hail core as we set up our second part of the chase.

While refueling and assessing the chase route near Fort Thompson, SD on the banks of the Missouri River, we noted some strange things. We had chosen a much further eastern path 20 miles away from the storm, and no chasers were noted anywhere near our location. The second strange thing was as the storm crossed the Missouri River, it became less high precipitation based and more classic. But what happened next was something we were simply not prepared for. Even as we type this, the residue and memories linger as we crossed that famed Cow Creek bridge along the Missouri River. Something impossible. Something magnificent. A Mothership was descending directly on our chase path.... to be continued

Something lurking ominous and spectacular as we cross the Missouri River near Fort Thompson, SD

An impossible sight after witnessing the monster HP Supercell... a developing mothership from the same storm just south of the Missouri River near Fort Thompson, SD...